Nelson Mandela in the Hospital.
AFP\Getty

God does not forbid bad things, this is the world of men, and no amount of prayer will change the inevitable. You can leave a fired candle with your baby and pray for the safety of the two year old, the will of your baby will prevail.

It is with gratitude to God and the will of the Nigerian people that I announce the death of the last publishing house in Nigeria. She is survived by four children (the enterprising Chinese pirate, the uneducated Nigerian intellectual thief, an intelligent Indian printing press, the government under-funded NCC) and two grandchildren (books from UK sales bonanzas, and books donated by Americans to Ojuelegba-under-bridge).

When was she born? Was it when Amos Tutuola’s “The Palm-Wine Drinkard” was first published in London? The truth is: every Nigerian date of birth, before 1960, is a suspicious invention. Birthdays were usually approximations: if your hand can touch your ears, you’re above six years.

When I was born, the Nigerian educational system was on life support, like Mandela at ninety four. That I can type English is due to the prayers of my parents. Writing about the history of Nigerian publishers is quite a feat, I should have read about it, but the person (Christopher Okigbo) who should have written the book was killed during the Nigerian Civil War. There was nothing civil about that.

Things Fall Apart by Chinua Achebe is my adopted beginning of publishing in Nigeria. Sales from Things Fall Apart encouraged Heinemann to establish the African Writers Series [i]. Achebe was the founding editor of the imprint, and after “self publishing”[ii] his book, he went on to publish about one hundred titles by other African Writers including Wole Soyinka, Ngugi wa Thiong’o, Doris Lessing, Nadine Gordimer, and Naguib Mahfouz. Achebe and the African Writers Series published plays, collections of poetry, novels, essays, collections of short stories, and they feed the literary hunger of the African continent. And “na who first die, get seniority for heaven”[iii]. I hereby declare Albert Chinualumogu Achebe the Patron Saint of African Literature.

Oh Father Achebe [iv]
Publishing is dying
The Chinese are here
Seeking our best titles
Our Authors are hungry, no royalties
We use Prizes and Grants to survive
Nigerian printers do not read English
Page 42 is after 56, followed by page 82
Our Bookshops are closing
Pirates are hawking on the road
There was a country, hundreds of thousands
Not a kobo to your family or publishers
Oh Achebe, how is Okigbo?
Are you walking in the dead?
There was a publishing house in Nigeria
Coming to join you, please edit her titles.

I have prayed to the ancestors of African publishing, but only the living can answer prayers.

Death of a Starving Child
Wikipedia

The civil war and a Nigerian road curbed Achebe’s creativity. The military regimes pursued Wole Soyinka out of the country, and they used the Nigerian “handbook of governance” to decimate intellectuals. They took schools from private owners and starved government institutions of funds. Everyone knows what excess education can do to the mind, it created an over sabi Wole Soyinka and a wahalaful Gani Fawehinmi, and many other “elements” that thought they knew better than the government. The Nigerian military destroyed printing presses who were printing subversive ideas like democracy and civilian administration. They broke the fingers of our best printers and blinded the eyes of others with money. The lucky ones were left to rot in jail for “wandering at night”.[v] The silent years began, and our best minds emigrated to western universities, and they never came back. The country died and poetry flourished because Nigerians didn’t understand verse, and truths could be hidden in poems.

We got rid of the military in 1999. Military rule is the worst form of administration, I pity Egypt. The military prospers on the obedience of commands. Creativity comes from questions, from the chaos of understanding. “Why” is the order of creation, to create is to rebel against dogma. Men must have the freedom to question the answers, scientists and artists are just expert interrogators.

After the military left, good books crept out of imaginations. The Literary Prizes soon followed, and publishing houses revived their literary practises. Then Farafina Books came with a dream. It went to the market with Chimamanda Adichie’s “Purple Hibiscus” and it began to sell. In Nigeria, it remains the number one literary bestseller of this millennium[vi]. But it is not solely published by Farafina Books in Nigeria. Our biggest competitors are unknown Nigerian businessmen and a chain of Chinese collaborators. To say that “all Chinese businessmen in Nigeria are pirates” is to assume that “all Nigerians are internet fraudsters”. This is how it works: they go to bookshops in search of bestsellers (usually Farafina Books) and they pirate hundreds of thousands in India or China, and they import pirated books into the country. Flooding the market with counterfeits and killing the dream.

At the beginning, Farafina Books published numerous titles from multiple writers, both profitable and unmarketable authors found a home in Kachifo Limited. The success of one could offset the cost of many others. And the quantity of quality writing was as diverse as the stars under the Onikan sky. The success of Farafina Books inspired other publishers like Yam and others. The Farafina Trust Creative Writing Workshop encourages and develops the skills of unknown and unpublished African writers. It remains the number one “boarding house” for budding writers in Africa.

At the moment, Farafina Books cannot publish as many titles as she would love to. This is a business: we pay for office space, security, electricity, insurance, internet services, financial services, copyright protection, legal services, petrol and diesel generators, library books, furniture and appliances, telephone bills, water supply, waste disposal, maintenance and servicing of equipments, renovations and aesthetics, office stationeries, staff training, and salaries of : editors, crazy editorial assistants, graphic artists, accountants, marketers, technicians, auditors, drivers, engineers, software programmers, and janitors. We pay corporate and income tax to the State and Federal governments. And our staffs have families, intend to raise families, enjoy office parties, and go for paid vacations (in their dreams). At the end of our working lives, we also deserve pension. We’ll like to pay our authors millions of royalties, and help produce a Nigerian Billionaire author. We’ll like to revive the Farafina Magazine, at least to publish my writings. And it will be nice for our Board to declare profit.

It’s a miracle to run an independent publishing house in Nigeria, prayers do not pay our bills. So when you ask if we have “China Must Go” or that other book not published by Farafina, I wonder if you want Farafina to use my “naira and kobo” to publish your reading pleasures.

What about the Nigerian Copyright Commission (NCC)? Shey you gave them money to be pursuing pirates up and down? Or are you expecting them to use their “two naira” salaries to be pursuing millionaire pirates? It takes cash to enforce the law, and it takes some Dora Akunyuli who doesn’t care if she makes her husband a widower and her children to be motherless. It takes an Olusegun Obasanjo to appoint a Dora Akunyuli and ensure she receives all the support she requires, both in funds and security. It takes the Nigerian media to sell a Dora Akunyuli to Nigerians.

So you’re still wondering why we didn’t publish your manuscript? So what if we did: we spend millions to produce your book, somehow we get to advertise and market your book without cost (very impossible), and your book makes it to the booksellers, and all the bookshops remit sales of your book after it has left their shelves, and your book makes a profit and Farafina sends you royalties. Then: the pirates smell blood and swoop in on the harvest. Farafina will not earn naira, neither will you, and I will not get paid. And everyone will be happy, shebi? Yeye! 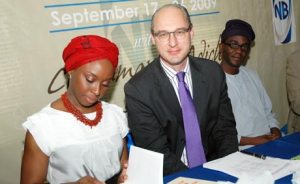 Thou shall not die!

If you like, say it does not concern you, after all Farafina did not publish your book and your entry was not accepted for the Farafina Trust Creative Writing Workshop. Don’t worry. Nigerian publishing will die and life will continue. Creative minds will go abroad to get their books published like flocks of Nigerians flying abroad for good education. The last printing press will eventually close, except on election years when they print campaign materials.

After the death of the last publishing house in Nigeria, other dreams will be inspired to venture into publishing, right?